'Chronicles', a Trumpet and Organ duo released a YouTube video on New Year's Day which details their work so far and their plans for the New Year. Celebrating the Island's rich culture and colourful history, the duo's music video has been delighting viewers, sparking interest both on and off the Island.
The video can be viewed here: http://www.youtube.com/watch?v=tZakKYgwrBI
Trumpeter, Russell Gilmour and Organist, David Kilgallon compose music inspired by the famous medieval manuscript the 'Chronicles of Mann', dating from 1257. The two Manx musicians have been crafting arrangements and composing by collecting and adapting tunes that were originally from Celtic and Norse cultures, including many of the locations mentioned in the manuscript.
Over the summer, they recorded a limited edition extended play (EP) single, entitled 'Prologue'. This disc was made available for sale at the famous Lorient International Celtic Festival last summer, and it is a taster of things to come from the duo.
'Chronicles' are continuing with fundraising activities for their feature-length album due for production in 2014. The duo are grateful for the support of several charitable trusts as well as the Isle of Man Arts Council and the Manx Heritage Foundation.
If you enjoy watching their video, the duo would love to hear from you, it is possible to contact them directly through their website www.chronicles.im 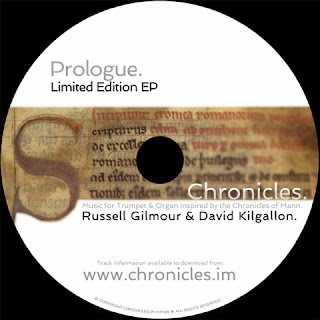